MacX Free iDVD Video Converter is the best companion for iDVD which is able to free convert all video formats to iDVD mp4 format, so that you may import both SD & HD videos to iDVD, burn DVD with iDVD tool on Mac. 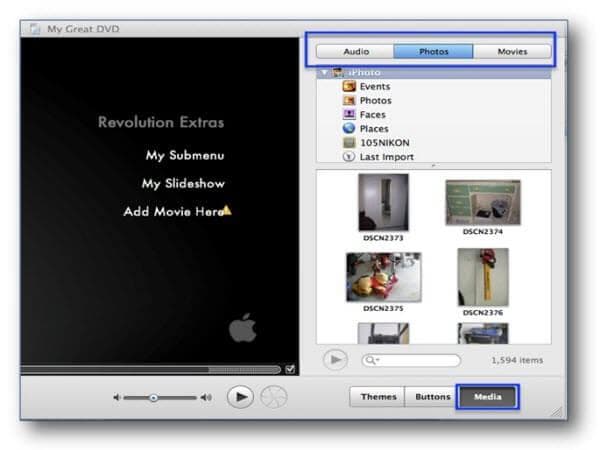 I have a 2009 iMac with iDVD, and in order to load the software onto my 2012 MBP, I copied the software and the Installed Themes onto my MBP, then placed them in the correct locations (Applications for iDVD and Library->Application Support for the themes. So far, so good. I open iDVD, but when I try to start a new project it looks for the themes. I have it go to the Installed Themes in Library, but when it asks to open them, there's nothing in the folders (named Disk 1 through Disk 6). I have repeated the process 3 times to no avail, after which I repaird the disk permissions. Does anyone have any ideas why it isn't seeing the themes?

Thanks, George. I can't even get to the screen you referenced in your reply. Now, when I try to open iDVD I get a message that asks me to go online to get updated themes. Try this basic troubleshooting fix: 1 - delete the IDVD preference file, com.apple.iDVD.plist, that resides in your User/Home/Library/ Preferences folder. 2 - delete IDVD'S cache file, Cache.db, that is located in your User/Home/Library/Caches/com.apple.iDVD folder. 3 - launch IDVD and try again. NOTE: In Lion and Mountain Lion the Home/Library folder is now invisible.

To make it permanently visible enter the following in the Terminal application window: chflags nohidden ~/Library and press the Return key -. If you're running Mavericks, 10.9, go to your Home folder and use the View ➙ Show View Options menu to bring the this window: Are the themes actually in the iDVD/Themes folder? You might try placing the iDVD folder with the Themes folder inside in the Home/Library/Application Support folder, go to the iDVD Advnace preference pane and point to them there. Anyone ever find a solution to this. I am experiencing it myself. Just bought a MBP with Mavericks and I tried to copy iDVD from my iMac. I copied the application into the applications folder, I selected View Options in my Home Folder and activated my Library.

I went to Library and deleted the IDVD CACHE folder and the IDVD Preferences folder. I then went to Library and in APPLLICATION SUPPORT and created a folder called IDVD. In that folder I placed the folder from the iMac called Installed Themes that I got from the iMac's Applications Support>IDVD folder. I then checked all the contents of the folders and I can see all the themes listed in folders called IDVD 1, IDVD 2, IDVD 3, IDVD 4, IDVD 5 and IDVD 6. I then open IDVD and get the following screen I go through and point to the Home>Library>Application Support>IDVD>Installed Themes folder.

The popup comes back and it will NOT point to the folder. Then, I go back into the folders and check their contents and they are empty. IDVD is ERASING the contents of the folders. I tried doing the fix that was previously mentioned by going to Preferences and selecting the folder location under advanced, However, Because IDVD will NOT open a new project, because it can not locate the themes, It will not allow me to access preferences. Any ideas on how to fix this? Serial over ip linux windows vm gaming.

I believe it said that it could not find any themes and would not open a new project. I had basically given up but tried one last time and got it to work. I found the iDVD folder in Applications on my previous computer and copied it all to the new one. Also, I knew that there was a library folder that contained the themes so I copied that. My problem was that I kept trying to paste that into its location on the new Mac and it would keep erasing the contents and not open them. I think there was somewhere in the preferences that would direct iDVD to the folder and I set that. It didn't work.

What I did was, i went into my local user folder and opened the folder called library. Wifi media connect philips code. There was a folder called Application Support. All, or most, of your applications will have a file in here that contains resources for the operation of the program.

In there, there should be a folder for iDVD. Open that and put your themes folder in there. I have 2 folders in there now. 'Installed Themes'. And 'Themes'. I assume I only need one of those but which, i dont know. I do know that the folder has to be named correctly or iDVD won't find it.

So, I will just leave it be. It's working now. Inside those folders there should be a series of folders called iDVD 1 through 7, in my case. I was able to find the folder right off today but I don't recall if it was a hidden file before.